Bela Fleck - Twice in a Week!

So, I had been looking forward to the Bela Fleck Banjo Summit for a while, and it did not disappoint. We went to the Paramount Theater in Rutland, an hour away, and saw some of the best music ever. The format was great too, because the musicians and the styles of music changed almost every song, so it never got dull.


On this stage stood about half of the most famous banjo players ever. Bela Fleck is a pure genius, and I think most would agree that he's on another level. Tony Trischka was there too. He actually taught Bela for a bit, and I was lucky enough to have had a lesson with him at his house. I distinctly remember he offered to make me a sandwich when I arrived!

Also performing was Abigail Washburn, Bela's wife and a beautiful singer who plays claw hammer style. Richie Stearns also plays claw hammer, and has a very haunting voice. He also wails on the banjo and sends it through effects including a wah wah pedal, which totally worked! Noam Pikelny is the new top dog in the young banjo players arena and he plays mostly with the Punch Brothers.


The backing band killed it too. One of my favorite flat-picking guitar players, Russ Barenberg, was as good as ever. The other musicians, Corey DiMario (bass), Casey Driessen (Fiddle), Corey DiMario (Bass) and Jesse Cobb (Mandolin)...I think that's right?! Anyways great show.


Although photography was forbidden, I loosely interpreted it as no flash photography. The Nikon V1 was perfect for this occasion. I can turn off the screen, and just use the viewfinder. By using the electronic shutter, it can also be silent. Not virtually. Completely. So no light or noise. Very unobtrusive. The focus is quick and spot on, since it uses a mix of phase can contrast detection methods of focus, and it can take pictures very rapidly as well.


I had the cheap mid range and telephoto zoom that came with it, and the nice 18.5mm (50mm equiv) f/1.8 lens. The lenses are tiny too. I had the camera and all three lenses in my jacket pocket. And with an electronic viewfinder, I can review images before taking them, so I don't have to chimp. I'm totally geeking out, but anyways, I'm convinced it's the greatest little surreptitious lens, perfect for concerts. There's also an adaptor to use regular nikon glass, so a cheap $250 50mm f/1.8 lens becomes a 135mm f/1.8 lens.

Okay, back to music.

The next week, Bela and his wife Abigail, along with their five month old son, came to Dartmouth. They performed in Spalding Auditorium. I didn't go. But I did get to see Bela and Abigail do a free demonstration and Q&A. And after the show, I couldn't resist. I asked Rob to get a photo of me and Bela. 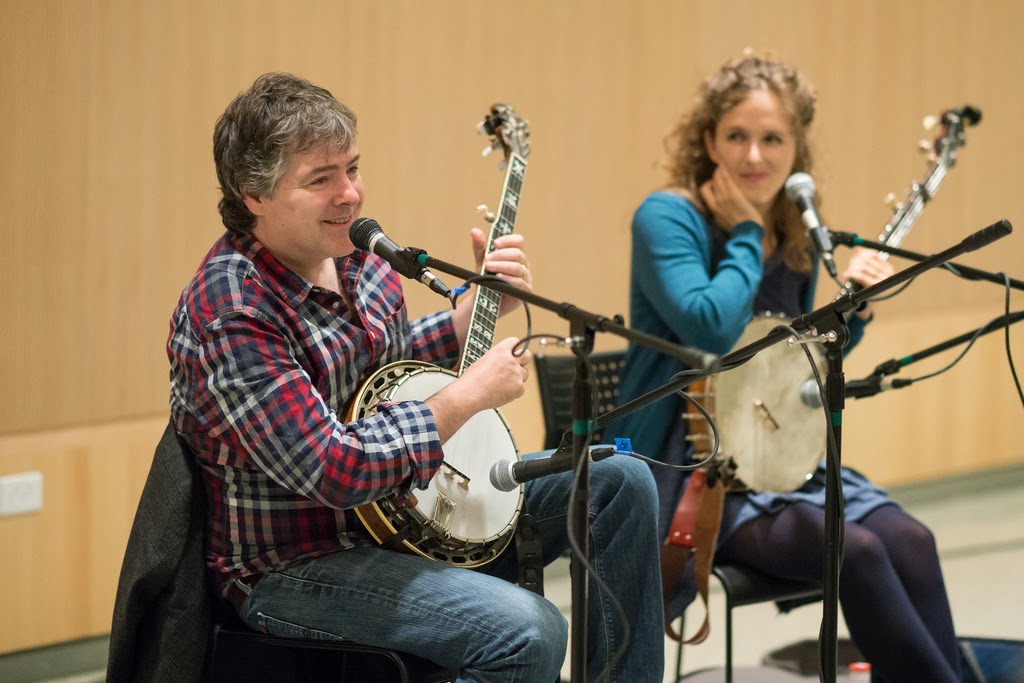